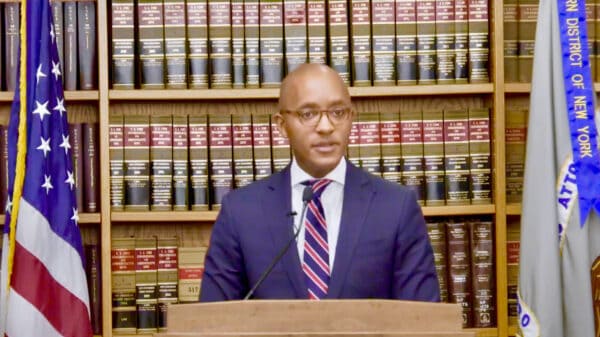 This afternoon, the US Attorney’s Office for the Southern District of New York held a press conference discussing the indictment of Sam Bankman-Fried, the one-time CEO of FTX and now the alleged perpetrator of one of the largest frauds in history.

As the details emerge, it appears that Bankman-Fried orchestrated the fraud since the launch of FTX back in 2019. Effectively, he used the crypto exchange as a piggy bank, pumping up FTX, buying real estate, and doling out millions of dollars in political contributions to curry legislative and regulatory favor.

Bankman-Fried was arrested in the Bahamas yesterday, where he awaits extradition to the United States to face eight counts of criminal charges.

In a release, US Attorney Damian Williams stated:

“One month ago, FTX collapsed, causing billions of dollars in losses to its customers, lenders, and investors.  Now, a federal grand jury in New York has indicted the former founder and chief executive officer of FTX and charged him with crimes related to the phenomenal downfall of that one-time cryptocurrency exchange, including fraud on customers, investors, lenders, and our campaign finance system.  As today’s charges make clear, this was not a case of mismanagement or poor oversight, but of intentional fraud, plain and simple.”

The presser explained that the day after FTX filed for bankruptcy, the US Attorney General’s office started an investigation, working every day on the case – “seeking justice.” Adding that it was “all hands on deck” in regards to the FTX case.

Last Wednesday, US Attorney Williams authorized the charges, and last Friday, the Grand Jury concurred. A warrant was then issued for Bankman-Fried’s arrest, who was quickly taken into custody in the Bahamas.

Williams shared that the investigation is “very much ongoing” but moving very quickly. He added that Bankman-Fried “knowingly defrauded investors? and executed deliberate transactions to disguise the misuse of customer funds.

He asked that any recipients of political contributions “to return the stolen funds.”

It has been widely reported that Bankman-Fried was the second-largest donor to the Democrat Party during the last cycle.

Asked who is cooperating with the investigation, and Williams was opaque, stating he was not at liberty to say who came in. At the same time, he advised that anyone who engaged in illicit activity on FTX to come and see them before they come and see you.

“We will hold you accountable,” said Williams.

Asked about Bankman-Fried’s parents, and Williams declined to answer, only to say they are not done with the investigation, alluding to future indictments.

Also attending the presser was Gurbir S. Grewal, the Director of the SEC, Division of Enforcement. Grewal told the audience that non-compliant trading platforms entail risk, and for any crypto exchanges that do not come in and register, the SEC will take action.

for any crypto exchanges that do not come in and register, the SEC will take action Click to Tweet

While numbers are not final, it has been reported that about $8 billion in funds have disappeared. Earlier today, John J. Ray, III, the new CEO of FTX who is managing the firm’s insolvency, described the actions of Bankman-Fried as old-school embezzlement.

The charges against Bankman-Fried were presented before a Bahamian magistrate judge today.