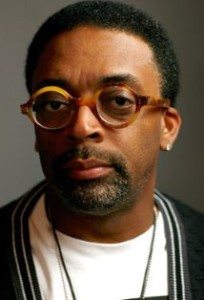 Accomplished Film Director Spike Lee was interviewed on CNBC today regarding his current Kickstarter crowdfunding campaign for a future film about human beings addicted to blood.  He is looking to raise $1.25 Million and he is almost half way their with just under $500,000.  Steven Soderbergh has reportedly kicked in $10,000 to help it along it’s way.

In his first visit to the New York Stock Exchange ever, Lee parried with the crew of  Squawk on the Street.  At times he was on the defensive as questions came asking whether he truly needs to crowdfund a film.

He parried with some valid points though.  Big studios today prefer “big tent pole films” that open worldwide to broad audiences.  His film is simply too small and the studios are not interested.  He asked why there is no Inside Man 2 – as Inside Man was one of his most successful films.  Lee mentioned it took him ten years to put together the film on Jackie Robinson.

Lee pointed out that if a studio does not want to finance a film that this is not indicative of the quality of the film.  Anyone who has actually seen a “Hollywood” film of late can attest to that fact as much of what comes out of the studios these days is rather subpar.  Lee stated that crowdfunding is the wave of the future – drawing a parallel as to how he used to raise funds by working the crowd – except there was no internet.

In the end no one is forcing anyone to contribute to Mr. Lee’s film.   So kudos to Spike Lee and his crowdfunding campaign targeting his base on Kickstarter.  The crowd will decide.