Crowdhoster Platform has already been leveraged by crowdfunding campaigns such as Soylent, Protos 3D Eyewear and MeUndies.

Crowdtilt  today formally released the first public version of its full-featured, open source, customizable crowdfunding tool:  Crowdhoster. Built using Crowdtilt’s API, Crowdhoster enables anyone, from individuals to businesses, to launch their own crowdfunding page with their own branding, hosted on their own domain, and with full control and ownership of all aspects of what they are funding.

Crowdhoster is personalized, hostable, and international. Anyone can launch a campaign without touching a line of code. And, because it’s also open source, developers can tailor, improve and modify the platform even further.

“Crowdfunding, in its current, restricted, vertical-specific form, could be so much more,” said James Beshara, Founder and CEO of Crowdtilt. “It could go from a part of our lives two-to-three times a year, to a part of our lives two-to-three times a week. Whether you use Crowdtilt.com for a $200 campaign with friends on a Friday night or you use Crowdhoster to build a $200,000 business halfway across the world, the gap between where crowdfunding is today and where it will be tomorrow will be filled by building the most open and accessible technology and tools for everyone,” Beshara said.

“Open source is in our DNA – and we want to provide the developer, entrepreneur, and business communities with a more powerful and more customizable platform than anything currently available,” added Beshara. “Any business, from an icon like Microsoft, to early-stage project creators, to coordinators outside country domains, can build their own crowdfunded brand with these tools – rather than depending on existing branded crowdfunding sites and the restrictions that come with them.”

Beshara followed that up by saying, “Damn straight.” 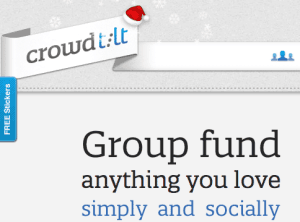 The free-to-use Crowdhoster platform allows users to run multiple, ongoing campaigns and easily set reward levels to incentivize contributors. Project administration is simple, the checkout experience is seamless, and the embedded CRM functionality sets a new standard for the space – finally giving campaign creators the tools they need to own and manage communication with their backers.

Although Crowdhoster has been in private development the last few months, the platform already has demonstrated crowdfunding success.  Crowdtilt is a technology company which was founded in 2012.  The San Francisco based company strives to build and offer the most open and accessible online crowdfunding tools to power everything from barbecues, to political campaigns, to startup businesses, to charity.