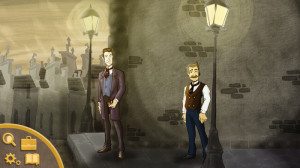 It looks like suspicious backer activity has led to the suspension of one campaign participating in Ouya’s #FreeTheGames fund, a crowdfunding contest on Kickstarter. Funding for Elementary, My Dear Holmes was suspended less than 24 hours ago.

The campaign was fully funded with almost a month left. Games are eligible for a funding match from Ouya if they raise at least $50,000 and remain exclusive to Ouya for at least 6 months. The campaign for Elementary, My Dear Holmes had met the threshold for eligibility.

This follows drama surrounding another Kickstarter campaign for Gridiron Thunder, which is also participating in the Ouya-backed contest. Gridiron Thunder was subjected to a lot of scrutiny from the crowd for the same type of activity from first-time backers, allegedly with fake names.

On Friday, campaign creator Sam Chandola released the following statement regarding the campaign.

First of all, a big, big thanks to all our backers who put their trust in us. The response we received for Elementary, My Dear Holmes was tremendous and it touched us all deeply. Who would have thought that a crazy idea that reversed John Watson and Sherlock Holmes in their roles could receive so much love and affection around it! You guys are all awesome.

When the uproar against Elementary, My Dear Holmes was brought up, we contacted Kickstarter and Amazon, asking them to investigate the accounts and take action accordingly. We wanted to get on top of this and did not want anything to do with any of what was happening as it was an extremely negative campaign for us. Strong personal accusations were going up against us, and it was a huge drain on our time, energy and resources.

We had been hoping that the suspicious accounts would have been suspended so that we could keep on going strong and without controversy, but instead it was the project that got so. We are, naturally, deeply saddened by this. But if this is what it takes to put an end to the negativity, so be it.

We love point-and-click adventure games and this will, by no means, stop us from pursuing Elementary, My Dear Holmes. We are devoted towards the project and will be seeking private equity to finish this up. And I’m happy to say that based on the initial traction that we got here, we are already in talks with some Venture Capitalists who are willing to back this project privately.Elementary, My Dear Holmes will see the light of day — and will see the light of day sooner than later.

I will be following this up with a personal message to all our backers. Until next time, John Watson and Sherlock Holmes lovers.

Kickstarter reserves the right to suspend a campaign for any reason they deem fit per their Terms of Use.

Eyes will now turn to the campaign for Gridiron Thunder, which is set to end tomorrow at 6:21 EDT. The question is whether that campaign will suffer the same fate.