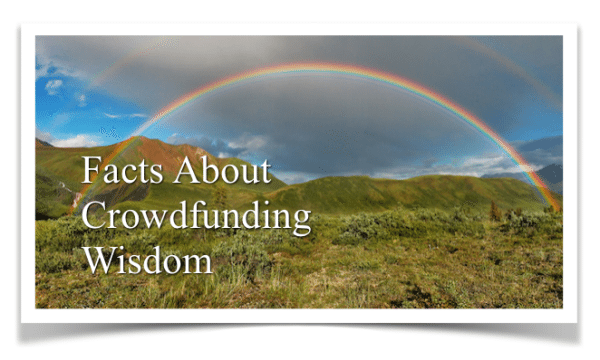 Dr. Richard Swart, a crowdfunding research authority and one of the leading thinkers on crowdfunding globally, has agreed to write a series of articles addressing key questions about crowdfunding. The first discusses a key question driven by the observation that organizations that successfully crowdfund appear to have a much higher likelihood of success that non-crowfunded organizations. So, Does Crowdfunding Select Better Companies?

As an academic researcher, and also someone deeply embedded in the alternative finance/social finance community, I am torn between the tension to provide guidance based on rigorously collected data, and the need for our industry to promote itself. These articles will attempt to clarify what we actually know

about crowdfunding and hopefully spur some lively and informed debate.

Numerous studies have conclusively shown that the vast majority of newly formed small companies will fail.  Yet, data collected by Professor Ethan Mollick at Wharton shows that crowdfunding may lead to more viable organizations. In a separate study by myself, Jason Best and Woodie Neiss of Crowdfund Capital Advisors, we found that firms that successfully use crowdfunding are more viable, create jobs, and experience revenue growth.  Let’s look beneath the cover a bit. And please pay attention to the devilish details….

The only good data set for looking at the long-term viability of firms that have used equity crowdfunding mechanisms is that from the Australia Small Scale Offering Board (ASSOB). Now in its 8th year, ASSOB reports some fascinating outcomes. More than 80% of firms that were financed through ASSOB are still functioning. There have been no reported incidences of fraud in this crowdfund equity market. 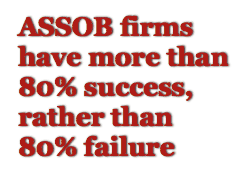 My research team looked for data out of Europe and the UK, but have been unable to find outcome data on equity crowdfunded firms in those markets. The US Market is too new for us to make any assessment of how new accredited investor backed equity crowdfunded companies will fare.

The fact that ASSOB firms have more than 80% success, rather than 80% failure, is intriguing.

What accounts for this? Empirically, we don’t know yet. That study is yet to be done. Here are some assumptions:

ASSOB – and many of the other equity crowdfunding platforms – have various layers of review, due diligence and analysis before a deal is allowed on the platform. In ASSOB’s case, it is a review by an accountant. Some European models require review by a professional investor.  While outcome data on the Venture Capital and Angel investing community offers very limited support to the idea that

they actually can select good companies (most investments are a failure, very few Angels make money and most VC deals are not profitable), there is still a role for curation and screening.  CircleUp does an incredible job of screening. OurCrowd, one of the most fascinating and fast growing of all equity crowdfunding companies, essentially operates like a full-fledged Micro VC firm on the back end.  One factor accounting for the success of crowdfund invested firms is the screening and curation done by seasoned investment and financial professionals working inside of crowdfunding platforms.

(2) Firms that are successful in equity crowdfunding are superior at market research, communication and mobilization of their network

No data yet exists comparing firms that have been successful, but the dynamics of crowdfunding will probably select firms whose team is able to use and mobilize their networks of investors and supporters. These skills will spillover into their ability to mobilize resources to solve business challenges, hence suggesting that these firms were more likely to succeed regardless of the financing model utilized.

Early data from Professor Christina Gunther in Germany shows that just like professional investors, consumer investors pay a great amount of attention to financial and governance materials provided by firms and ask very good questions. This supports the argument that consumer investors are able to make reasoned decisions and probe the offerings, despite a “lack of sophistication.”

Crowdfunding investors appear to pay a great deal of attention to the financial and governance material that firms provide.

The CCA data on the impact of equity crowdfunding success on companies was from a small sample (still significant though) and looked at firms in the US, UK, EU and and a couple in Africa.

Our data showed that equity crowdfunding is used by micro-enterprises. If the firm has more than 2 employees, it quickly hires on average 2.2 employees. Proceeds are very quickly reinvested back into the firm, usually spent within a matter of a few months. One interpretation of this data is that these are capable micro-enterprises that are capital constrained, and that the infusion of capital allows them to quickly hire additional key personnel to execute the business plan described in their offering. We also found a shocking statistic that firms who had raised equity crowdfunding has a 351% percent increase in quarterly revenues once they received their funds.

Critics of crowdfunding often propose that unscrupulous people will raise money through perks and donation crowdfunding and not use the money for the stated purposes.  We will tackle what the data says about the prevalence of fraud in another article [there is and will be fraud and I do support regulation]. But this begs the question: does successful crowdfunding lead to ongoing activities?

Professor Mollick at Wharton and Professor Kuppuswamy at the University of North Carolina conducted a study that looked at the viability of organizations that had used Kickstarter and raised at least $5000 dollars.  I have often been misquoted here – the data says organizations, not for-profit firms – and his research team randomly sampled projects and looked to see what they were doing.  To my great surprise, his study showed that 90% of the groups (community not-for-profits, individuals, small businesses, startups, all types) that had been successful, were still engaged in the activity for which they raised the funds. The study had a sample window of five years, meaning the organizations had been active 1-4 years.

So, that clarification aside, the data suggests that crowdfunding enables people to continue doing the thing they set out to do for years. Why?

Extensive research needs to be done, but we can make some initial assumptions.

(1) Crowdfunding Creates or Mobilizes a Social Network and Community

Interviews with project creators often report that a successful campaigns lead to project/product evangelists, employee/volunteer recruitment, modification of the business model or project plan, and that they continue to receive support from the supporters long after the campaign.

In unpublished research I conducted, we interviewed nearly 30 company founders who had been successful in crowdfunding. Among the findings was that there is marked change in the founder’s self-confidence and perception of their own abilities. Classical theory suggests that entrepreneurship is about the discovery and exploitation of market opportunity. New theoretical models suggest that successful entrepreneurship is about the willingness of the founder to take action and create opportunities (the opportunity exists once it is created, not that it is discovered). So, what does this mean? Success in crowdfunding may empower the founder to persevere and continue in the endeavor – allowing them to keep creating more opportunities.

Communities created through crowdfunding create expectations and place demands on the founders. The communities themselves can become very emotionally engaged in the project; witness the recent furor over the acquisition by Facebook of crowdfunding legend Oculus. No research has been done yet, but simply observing these communities suggests that the social cohesion creates a social contract between the project originator and the backers.

Wisdom of the crowd

It appears that there is wisdom in the crowd, and that that wisdom is joined by a deep emotional connection to the projects and founders. We cannot yet make the argument that crowdfunding is able to select the best companies but early data strongly suggests that, for now at least, the mechanisms and dynamics inherent in crowdfunding are enabling firms and organizations to be successful for longer than other firms.