OnDeck, an online platform for small business lending, has  announced that it has filed an S-1 registration statement with the Securities and Exchange Commission for a proposed initial public offering of its common stock. OnDeck has applied to list its common stock on the New York Stock Exchange under the symbol “ONDK.”  The S-1 statement (embedded below) indicates a targeted raise of $150 million.  The final amount could of course change.

OnDeck was originally launched in 2007.  Since that time the platform states it has facilitated over $1.5 billion in loans for almost 700 different industries in all 50 states, including restaurants, retailers, auto repair shops, healthcare professionals, HVAC contractors and many other service providers. 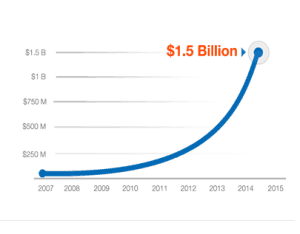 Lending Club, a leader in the peer to peer lending space was the first transformational lending platform to file for an IPO this past August.  Lending Club is expected to list shares on the NYSE later this year.

(Editors Note: The article was updated with the S-1 information as embedded below)