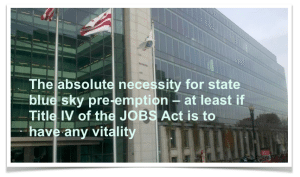 The ongoing battle between the States and the Securities and Exchange Commission took another step forward this week as the Commission responded to the States claims.  States securities regulators in both Montana and Massachusets, supported by the North American Securities Administrators Association (NASAA), have persistently expressed their dislike and disdain of Regulation A+.  The updated exemption, a form of equity crowdfunding, became actionable just this year but was signed into law as part of the JOBS Act of 2012.

The debate hinges largely on the question as to whether or not Congress authorized the SEC to define qualified purchasers as anyone, thus removing a discriminatory aspect of investing in certain private placements, and the removal of state Blue Sky Review.

Regulation A [+] offers advantages for issuers and investors. Issuers do not incur the costs of preparing a registration statement and may sell their securities publicly to a broad range of investors, subject to limitations imposed by the rule challenged here. Amendments for Small and Additional Issues Exemptions Under the Securities Act (Regulation A), JA20, 22 (Jan. 23, 2014) (Proposing Release). Investors, in turn, enjoy more opportunity to participate in the capital markets with limited restrictions on resale, which enhances liquidity. 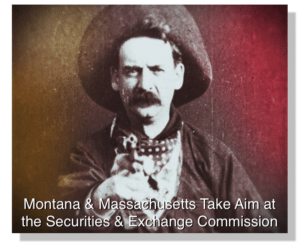 The SEC explains that while the process allows for issuers to solicit interest from investors, otherwise called Testing the Waters (TTW), an offer may only be initiated following the approval of an offering statement by the SEC.  The SEC also points to the fact that authorities continue to have the ability to file suit against any issuer who files false or misleading statements – and are “not exempt from federal protection”.

The SEC also acknowledges that state review “adds a layer of investor protection” but correctly highlights the fact it is this state review process that ballooned the cost to the point that no-one ever used the old exemption.

Congress mandated that the SEC fix old Regulation A.  They did just that.  The GAO did a study that determined “that one central reason for the relative disuse of Regulation A was the cost of complying with state law”. 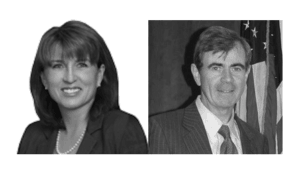 This process will take many months to complete. Oral arguments are not yet scheduled. Many participants in the equity crowdfunding industry believe the case against the SEC is a fools errand and without merit. The bipartisan Advisory Committee on Small and Emerging Companies have added their voice for the need to keep Blue Sky pre-emption, but then the states of Montana and Massachusetts, supported by taxpayers money, do not seem inclined to give up on what may be a lost battle.

The filing by the SEC is embedded below.