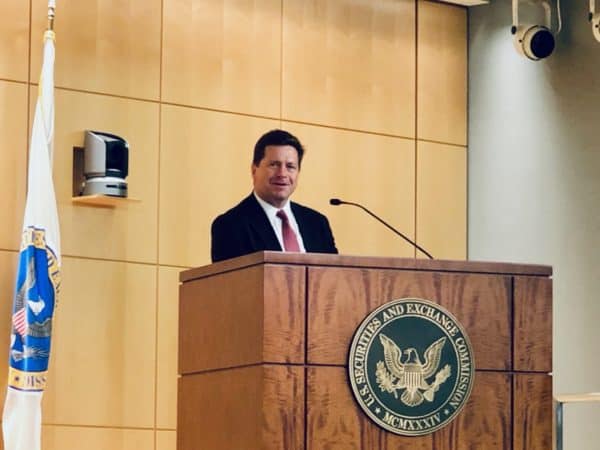 During an open meeting of the Securities and Exchange Commission (SEC), the Commission approved updates to the exempt offering ecosystem that are designed to improve access to capital, boost access to greater opportunity for investors while maintaining important investor protection criteria.

Additional improvements including testing the waters, special purpose vehicles (SPVs) for Reg CF offerings made the final cut in a process that started years ago but were formally engaged by the current commission when it was announced that a review of the exempt offering ecosystem would be conducted.

“The recommended amendments reflect a comprehensive, retrospective review of a framework that has, over time, unfortunately, become difficult to navigate, for both investors and businesses, particularly smaller and medium-sized businesses.  Some have referred to it as a “patchwork” – I will explain this in a bit more detail later.  Today’s amendments would rationalize that framework, increase efficiency, and facilitate capital formation, while preserving or enhancing important investor protections,” said Chair Clayton.

In a release regarding the rule changes, Chair Clayton explained that for many SMEs the current exempt offering framework is the only viable channel for raising capital:

“These businesses and their prospective investors must navigate a system of multiple exemptions and safe harbors, each with different requirements. While each component in this patchwork system makes some sense in isolation, collectively, there is substantial room for improvement. The staff has identified various costly and unnecessary frictions and uncertainties and crafted amendments that address those inefficiencies in the context of a more rational framework that will facilitate capital formation for small and medium-sized businesses and benefit investors for years to come.”

Commissioners Hester Peirce and Elad Roisman supported the rule changes. Commissioner Peirce said they need to do more for smaller firms, the engines of capital creation.

“We have to do a better job of getting capital to businesses,” said Commissioner Peirce. “I view today’s work on harmonizing, simplifying, and improving the exemptive framework to be a positive step, but we have more work to do to ensure that small- and medium-sized businesses all across the country can raise capital in a way that works for them, supports economic growth, and is consistent with investor protection.

Commissioners Caroline Crenshaw and Allison Herren Lee both worried that further opening of private markets will mean that retail investors will be subjected to investment opportunities with greater risk – perhaps a risk they cannot withstand.

Somewhat obtusely, Commissioner Crenshaw predicted that expanding access to private markets will create a greater economic divide where the wealthy will be able to get richer to the detriment of a less affluent demographic.

“Instead of providing retail investors access to that elusive high return rate, the majority’s steady march of expanding the private markets will only further entrench the country’s increasing and concerning economic divide,” said Commissioner Crenshaw.

Commissioner Roisman challenged Commissioner Crenshaw’s hypothesis that these updates would lead to a greater wealth disparity.

In the end, the 3-2 vote ensured the rules were adopted as Chair Clayton joined with Commissioners Roisman and Peirce in backing the measure.

Youngro Lee, founder and CEO of NextSeed, founding Chairman of the Association of Online Investment Platforms (AOIP), as well as a member of the SEC’s Small Business Capital Formation Committee, shared the following statement:

“These changes are a reflection of how far this industry has come since 2016.  Regulation Crowdfunding has had a fundamentally positive impact for thousands of local economies and small businesses across the country, and with these changes, we are optimistic that these positive impact will accelerate much more.  So many people and companies have worked so hard over the years to prove that Regulation Crowdfunding can be a sustainable force for good, and we are grateful that the Commission recognized this potential and worked so hard to advance a thoughtful framework.  The SEC has always been viewed as the global thought leader on how to strengthen capital markets — with these changes, it has made an incredible statement that the democratization of private capital markets accesible to everyone is truly an important and worthwhile goal to pursue and protect.”

#RegCF has had a fundamentally positive impact for thousands of local economies and small businesses across the country, and with these changes, we are optimistic that these positive impact will accelerate much more Click to Tweet

Doug Ellenoff, Managing Partner of the law firm of Ellenoff, Grossman & Schole, a longtime Fintech advocate and Counsel to the AOIP, said the changes announced will help make the crowdfunding industry sustainable.

“Once again the SEC must be recognized for listening to the Association of Online Investment Platform’s RE questions and advancing proposed rules that are necessary to further advance the crowdfunding industry. Increasing the maximum amount that can be raised through the Regulation Crowdfunding exemption is the single most important issue that has been needed to attract more and better quality issuers and to provide online investment platform with fees to scale up their operations. The other proposals are important for other reasons and in the aggregate will enhance the industry’s viability for the future.”

“Under Chairman Clayton, the SEC has been remarkably proactive in promoting financial access for small businesses and financial inclusion for retail investors. The harmonization rule is a perfect closure to his successful tenure at the Commission.”

Under Chairman Clayton, the SEC has been remarkably proactive in promoting financial access for small businesses and financial inclusion for retail investors. The harmonization rule is a perfect closure to his successful tenure at the Commission Click to Tweet

“Today’s approval of the Harmonization Rules will be remembered as the long-awaited, and needed fuel, to the reg-crowdfunding engine. Republic would like to thank the Commission for their efforts in meeting with, listening to and addressing the needs of private companies and the intermediaries that serve them. We are enthused by what raising offering limits, liberalizing investor investment limits and rationalizing communication rules – we can’t wait for the future of this industry and see today as a major win for retail investors looking to diversify their portfolios and support businesses they believe in. We want to also take this time to encourage companies who previously believed Reg CF or Reg A+ were too small or immature for their needs to take a second look at this rapidly maturing section of the private capital markets.”

Today's approval of the Harmonization Rules will be remembered as the long-awaited, and needed fuel, to the reg-crowdfunding engine Click to Tweet

Most of the rule changes have long been advocated by the AOIP, other industry participants, as well as the SEC Small Business Capital Formation Committee.

What is certain is that all investment crowdfunding platforms will view the SEC’s rule changes as a much welcomed pre-election gift that will help fuel the sector of online capital formation while making it easier for platforms to eventually turn a profit. As Chair Clayton is expected to exit the Commission at the end of the year, he will be exiting on a high note by accomplishing a long-standing goal of improving access to capital for smaller firms.

The updated rules, outlined below, will go into effect 60 days after publication in the Federal Register.

The Securities and Exchange Commission today amended the rules under the Securities Act of 1933 to simplify, harmonize, and improve certain aspects of the exempt offering framework to promote capital formation while preserving or enhancing important investor protections.

An updated summary chart of the offering exemptions is included at the end of this fact sheet for reference.

Entrepreneurs and emerging businesses often use the exempt offering framework under the Securities Act for such purposes as raising seed capital for a new business or funding their businesses’ growth. This can be a critical step on the path to an initial public offering and navigating that path has required navigating the complex exempt offering framework. The complexity of that framework reflects its evolution over time through legislative changes and Commission rules that have resulted in differing requirements and conditions for exemption. In many cases, businesses, particularly smaller enterprises, have found the framework confusing and difficult to navigate.

In March 2020, the Commission issued proposed amendments and solicited public comment on its proposals to simplify, harmonize, and improve the exempt offering framework under the Securities Act. Informed by the comments received, as well as other feedback including recommendations of the Commission’s advisory committees, the SEC’s Government-Business Forum on Small Business Capital Formation, and direct outreach to, and engagement with, investors and issuers, the amendments are intended to reduce potential friction points to make the capital raising process more effective and efficient to meet evolving market needs.

Integration Framework.  When issuers use various private offering exemptions in parallel or in close time proximity, questions can arise as to the need to view the offerings as “integrated” for purposes of analyzing compliance.  This need results from the fact that many exemptions have differing limitations and conditions on their use, including whether the general solicitation of investors is permitted. If exempt offerings with different requirements are structured separately but analyzed as one “integrated” offering, it is possible that the integrated offering will fail to meet all the applicable conditions and limitations.

The amendments establish a new integration framework that provides a general principle that looks to the particular facts and circumstances of two or more offerings, and focuses the analysis on whether the issuer can establish that each offering either complies with the registration requirements of the Securities Act, or that an exemption from registration is available for the particular offering.

Offering and Investment Limits.  The Commission is amending the current offering and investment limits for certain exemptions.

For Regulation A, the amendments:

For Regulation Crowdfunding, the amendments:

For Rule 504 of Regulation D, the amendments:

“Test-the-Waters” and “Demo Day” Communications.  The Commission is amending offering communications rules, by:

Other Improvements to Specific Exemptions.  The amendments also: