We at Darkseas want to do everything we can to support other indie developers. We’re big fans of the Ouya’s mission of encouraging people to get into game development and breaking down barriers between players and developers.

That said, being disingenuous via kickstarter hurts others’ chances of benefiting from this important source of funding.

Clearly the spirit of Ouya’s free the games fund was to get exclusive content on the Ouya that people actually want to play. Remember that Ouya only asked for $800k and received $8.5 million, so you could say that the $1 million offered via the free the games fund comes directly from those backers.

So assuming the $78k pledged will be recycled back into the pockets of those who pledged, as many allege online, it is cheating more than just Ouya, it’s cheating Ouya’s backers too.

Furthermore the insinuation that the game will feature NFL teams and the explicit statements that it will feature current NFL players seems to violate the exclusive agreement that EA has to feature both of these, in console games. I feel like this deserves an explanation beyond “I’m a lawyer so it’s cool”.

Kickstarter has provided incredible opportunities to indie developers who would have never had a chance to realize their vision without this funding source. Every attempt to violate the integrity of the kickstarter platform diminishes this opportunity for future developers, and I take as a personal offense. 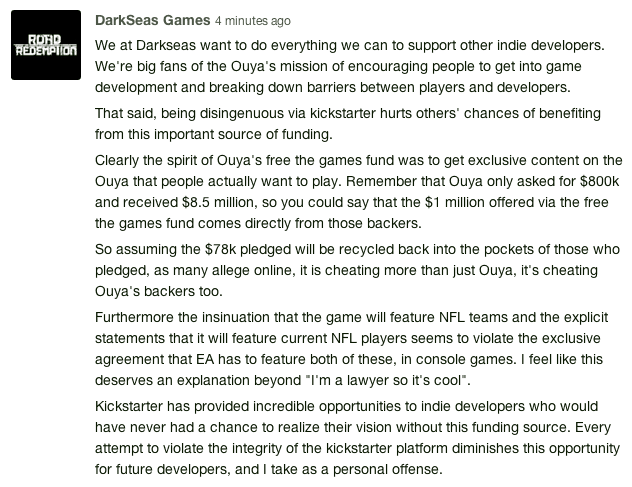