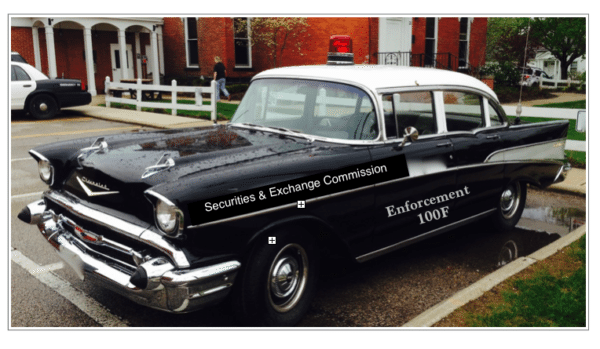 A review of the Securities and Exchange Commission’s (SEC) enforcement actions in this fiscal year show a growing threat posed by cryptocurrency and decentralized finance (DeFi) scammers. The year ended Sept. 30.

Overall, 697 total enforcement actions were filed, including 120 against issuers for delinquent filing and 143 “follow-on” proceedings that sought bars against people for criminal convictions, civil injunctions, or other malfeasances.

Orders for almost $2,4 billion in disgorgement fees and more than $1.4 billion in penalties, the latter a 33 per cent increase, were obtained. A total of $564 million was awarded to whistleblowers.

Among the highlights the agency cited were charging Poloniex for operating a digital asset exchange and the BitConnect platform and some top executives in an alleged $2 billion cryptocurrency scam.

They also entered into new areas like SPACs, highlighted by an action against the Stable Road Acquisition Company which alleged, among other things, a former CEO tried to obtain shares worth around $200 million.

More new territory was explored as the SEC charged individuals in decentralized finance. In August, they hit Blockchain Credit Partners with charges they offered unregistered securities which raised more than $30 million.

Then the SEC ventured in the murky areas of the dark web by charging James Roland Jones of Redondo Beach, Cal. With selling “insider tips” on the dark web. To access the dark web and obtain insider information for his own activities, Jones allegedly lied about having non-public information to exchange.

Also in the crosshairs was regulation crowdfunding. On Sept. 20 the SEC charged a trio with concocting a fraudulent plan to sell almost $2 million of unregistered securities via a pair of crowdfunding offerings.

According to the complaint, Robert Shumake, alongside Nicole Birch and Willard Jackson, conducted fraudulent and unregistered crowdfunding offerings through two cannabis and hemp companies, Transatlantic Real Estate LLC and 420 Real Estate LLC. Shumake, with assistance from Birch and Jackson, allegedly hid his involvement in the offerings from the public out of concern that his prior criminal conviction could deter prospective investors.

On Sept. 23 the SEC charged quant Sergei Polevikov with running a years-long scheme that netted him at least $8.5 million. For more than five years ending in 2019, Polevikov had access to real-time, non-public information about the size and timing of his employers’ securities orders and trades, and used it to secretly trade on, and ahead of, his employers’ trades. While practice didn’t make perfect, Polevikov got away with it nearly 3,000 times before being nabbed by the SEC’s own data analytics tools.

Electronic traders were also caught. On June 29 the SEC announced Neovest, a provider of order and execution management software for electronic trading, agreed to pay $2.75 million for failing to register as a broker-dealer. It was the first such charge by the agency against an OEMS provider.

Prior to being acquired by JPMorgan Chase, Neovest engaged in order routing through its registered broker-dealer, Neovest Trading Inc.  The order found that although Neovest withdrew its broker-dealer registration after it was acquired, it continued to operate the OEMS as an unregistered broker-dealer by, among other things, participating in the order-taking and order-routing process and soliciting customers and destination brokers through the firm’s website and direct outreach at industry conferences and trade shows.

“Neovest played a role in determining the routing options that were available to its customers by entering into agreements with the destination brokers,” the SEC said in a statement at the time.

And we haven’t even touched on Robinhood yet.

In late 2020, the SEC charged that company with “repeated misstatements” that failed to disclose their receipt of payments from trading firms for routing customer orders to them, and for failing to satisfy its duty to seek the best reasonably available terms to execute customer orders.  Robinhood agreed to pay $65 million to settle the charges.

Robo-advisors also got into trouble. On Aug. 19 the SEC settled charges against SoFi Wealth for breaching its fiduciary duties two years earlier. According to the SEC, on April 12, 2019, the company transferred assets from around 20,000 client accounts from third-party ETFs into two new ETFs sponsored by SoFi. SoFi Wealth then sold the third-party ETFs its clients had held and used the proceeds of those sales to purchase positions in the SoFi ETFs, which triggered tax consequences for many of SoFi Wealth’s clients.

Other highlights cited by the SEC in the review included nailing Loci and its CEO John Wise for allegedly making materially false and misleading statements in connection with an unregistered offer and sale of digital asset securities.

On July 14 they charged Coinschedule operator Blotics Ltd. with violating the anti-touting provisions of the federal securities laws by failing to disclose the compensation it received from issuers of the digital asset securities it profiled.

People continued to get caught in various cryptocurrency scams. On Feb. 1 the SEC charged three people with defrauding hundreds of retail investors out of more than $11 million through two fraudulent and unregistered digital asset securities offerings. According to the complaint, from approximately six months ending in May 2018, Kristijan Krstic, founder of Start Options and Bitcoiin2Gen, and John DeMarr, the primary U.S.-based promoter for these companies, fraudulently induced investors to buy digital asset securities.

From approximately December 2017 through late January 2018, Krstic and DeMarr allegedly touted Start Options’ purported digital asset mining and trading platform. According to the complaint, they falsely claimed Start Options was “the largest Bitcoin exchange in euro volume and liquidity” and “consistently rated the best and most secure Bitcoin exchange by independent news media.”

Then on Aug. 4, they charged token issuer Uulala and founders Oscar Garcia and Matthew Loughran for allegedly defrauding more than a thousand investors in an unregistered offering of digital asset securities that raised more than $9 million. Uulala and Garcia for allegedly engaging in a second fraudulent offering of convertible notes.

The complaint alleges that, from December 2017 through January 2019, Uulala sold UULA tokens, which were alleged to be used to record transactions in an app Uulala was developing and promoting to those without access to traditional banking services. Uulala, Garcia, and Loughran supposedly made materially false and misleading statements to investors throughout their offering of UULA about having “patent pending” technology that had been incorporated into their app and having a proprietary algorithm to assign credit scores to users of their app. The complaint further alleges that Uulala and Garcia then made materially false and misleading statements about Uulala’s financial performance in the convertible notes offering. It is also alleged Uulala did not register its offers and sales of UULA tokens with them.